This guide contains tips and resources for researching the laws of foreign countries.

"Foreign law" refers to the domestic law of a nation outside of the United States.

Whenever you begin a foreign legal research project, you will need to refer to secondary sources and research guides in order to learn about the country’s legal system and sources of law, and to identify strategies for researching the country's primary law. This LibGuide will provide you with the resources you need to learn about a country's legal system and to begin locating secondary sources and primary law.

"Foreign law" refers to the domestic law of a foreign nation.

"International law" refers to the law that governs relationships  of national governments across national boundaries.

"Comparative law" refers to the study of similarities and differences between the laws of two or more countries or legal systems. It is not a type of law, but rather a method or approach to legal inquiry. When doing comparative law, you will likely need to research the law of at least one foreign jurisdiction - hence its relevance here.

Although every country in the world has its own distinct legal regime, each one falls into one of these five types of legal systems. The countries grouped under a single type of system tend to have a shared history when it comes to legal development, have similar types of publications, and rely on the same types of sources as primary and secondary authority. Identifying your country's legal system will help you to understand which sources constitute primary and secondary sources of law and will help you to formulate a research strategy accordingly.

Common law systems are characterized by the precedential value given to case law.

This type of system is prevalent primarily in the United Kingdom and its former colonies, including 49 of the 50 U.S. states.

In a religious law system, such as Islamic law or Jewish law, the law is based on religious tenets and scripture.

Today, most religious law systems can be found in the Middle East, parts of Africa, and Southeast Asia, where there are large Muslim populations or strong Islamic influences.

In a customary law system, the law is based on deeply rooted concepts and customs that have taken on the force of law over time. The law in these systems is understood and accepted by the population without ever being written down or codified. Customary law in today's world usually takes the form of tribal laws or the laws of indigenous peoples.

The final type of legal system, the mixed legal system, is one in which the law is a mixture of two or more of the previous four types of legal systems. Mixed legal regimes vary quite a bit in their history, structure, and publications, and even in how well the different types of law within each regime have been integrated or made to work together.

Louisiana operates under a mixed legal regime. The Louisiana legal system is a combination of the common and civil law. 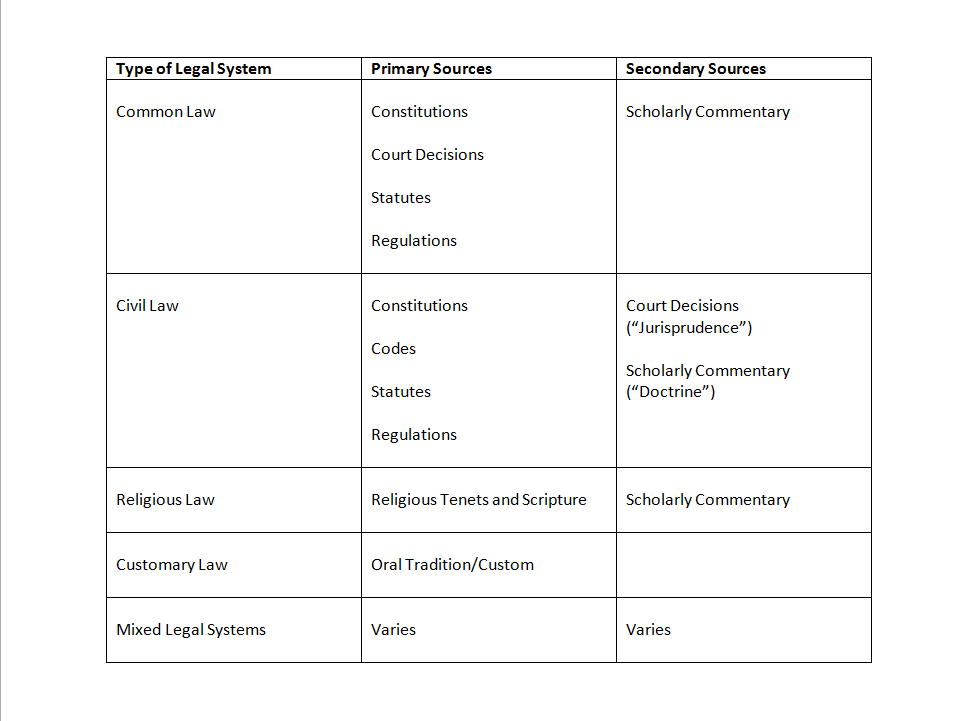