This resource guide is intended to assist students conduct tax research relevant to their work in the Tax Policy and Procedure Seminar. Additional materials are available; please feel free to stop by the reference desk for assistance.

US Constitution. The U.S. Constitution, which went into effect in 1789, is the supreme law in the United States. The Constitution gives Congress the power to levy taxes. The table below highlights important Constitutional provisions for tax law research purposes. 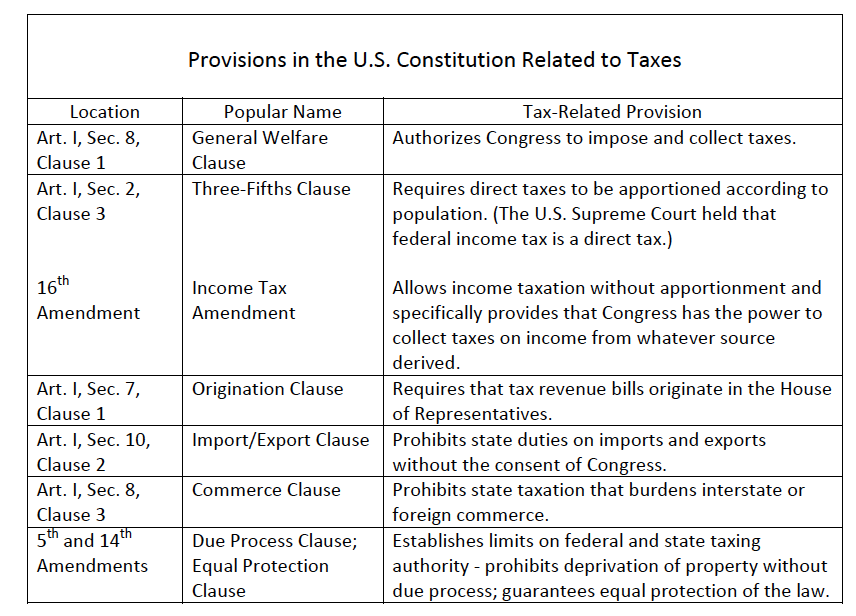 Tax Treaties. The United States has income tax treaties with a number of foreign countries. Under these treaties, residents (not necessarily citizens) of foreign countries are taxed at a reduced rate, or are exempt from U.S. income taxes on certain items of income they receive from sources within the United States. These reduced rates and exemptions vary among countries and specific items of income. Look here for the complete texts of many of the tax treaties in force and their accompanying Treasury Technical Explanations. For further information on tax treaties refer also to the Treasury Department’s Tax Treaty Documents page.

Additional content is available through this dedicated database of tax treaties on Westlaw, among other locations.

Internal Revenue Code and other statutory law. Title 26 of the United States Code covers tax laws and is known as the Internal Revenue Code. It is cited as “26 USC” or simply by its name, the Internal Revenue Code or IRC. The IRC provides the foundation of all federal tax authority in the United States and is the
ultimate authority when researching federal tax law issues. The IRC is interpreted by Treasury regulations, cases that interpret the laws, and IRS rulings.
The IRC is supplemented by individual laws passed by Congress and signed into law by the President (or enacted by Congress by a 2/3rd vote to override a Presidential veto). These individual laws are all assigned a Public Law number (P.L.) and published in the Statutes at Large. These individual laws amend the IRC, but include extra information such as effective dates, transitional rules, and special rules that are not formally included in the codified IRC.
These extraneous rules are often referred to as noncode provisions. The IRC covers income, estate and gift, employment and excise taxes. Procedure and administration are also covered. The IRC does not include all federal tax statutes. For example, there are tax laws found in USC Title 11 (bankruptcy) and Title 28 (judiciary). Other federal statutes that are not contained in the Internal Revenue Code, such as effective date provisions or sunset provisions, provide additional tax laws that must be followed.

In some ways state and local taxation closely resembles the federal taxation scheme. As with the federal system, the state legislature is charged with passing its taxing statutes, similar to the Internal Revenue Code. Analogous to the Internal Revenue Service on the federal level, each state has a corresponding regulatory tax agency that passes state administrative regulations and rulings. Similarly, state courts generate judicial opinions, although most states do not have an official tax court.

However, states engage in a wide variety of different taxes that are unrelated to income: e.g., property taxes, sales & use taxes, excise taxes, estate and inheritance taxes, and liquor taxes. Often, these different tax laws are scattered throughout the states' codes and are not codified together into a cohesive "tax code." Accordingly, using specialized state tax resources will help streamline the research process.

For anyone not familiar with the inner workings of tax administration, the array of IRS guidance may seem, well, a little puzzling at first glance. To take a little of the mystery away, here's a brief look at seven of the most common forms of guidance.

In its role in administering the tax laws enacted by the Congress, the IRS must take the specifics of these laws and translate them into detailed regulations, rules and procedures. The Office of Chief Counsel fills this crucial role by producing several different kinds of documents and publications that provide guidance to taxpayers, firms and charitable groups.

A regulation is issued by the Internal Revenue Service and Treasury Department to provide guidance for new legislation or to address issues that arise with respect to existing Internal Revenue Code sections. Regulations interpret and give directions on complying with the law. Regulations are published in the Federal Register. Generally, regulations are first published in proposed form in a Notice of Proposed Rulemaking (NPRM). After public input is fully considered through written comments and even a public hearing, a final regulation or a temporary regulation is published as a Treasury Decision (TD), again, in the Federal Register.

A revenue ruling is an official interpretation by the IRS of the Internal Revenue Code, related statutes, tax treaties and regulations. It is the conclusion of the IRS on how the law is applied to a specific set of facts. Revenue rulings are published in the Internal Revenue Bulletin for the information of and guidance to taxpayers, IRS personnel and tax professionals. For example, a revenue ruling may hold that taxpayers can deduct certain automobile expenses.

Search only for revenue rulings in this dedicated Westlaw database (1954 -).

A revenue procedure is an official statement of a procedure that affects the rights or duties of taxpayers or other members of the public under the Internal Revenue Code, related statutes, tax treaties and regulations and that should be a matter of public knowledge. It is also published in the Internal Revenue Bulletin. While a revenue ruling generally states an IRS position, a revenue procedure provides return filing or other instructions concerning an IRS position. For example, a revenue procedure might specify how those entitled to deduct certain automobile expenses should compute them by applying a certain mileage rate in lieu of calculating actual operating expenses.

Search only for revenue procedures in this dedicated Westlaw database (1954 -).

A private letter ruling, or PLR, is a written statement issued to a taxpayer that interprets and applies tax laws to the taxpayer's specific set of facts. A PLR is issued to establish with certainty the federal tax consequences of a particular transaction before the transaction is consummated or before the taxpayer's return is filed. A PLR is issued in response to a written request submitted by a taxpayer and is binding on the IRS if the taxpayer fully and accurately described the proposed transaction in the request and carries out the transaction as described. A PLR may not be relied on as precedent by other taxpayers or IRS personnel. PLRs are generally made public after all information has been removed that could identify the taxpayer to whom it was issued.

Search only for private letter rulings in this dedicated Westlaw database (1950 -).

A technical advice memorandum, or TAM, is guidance furnished by the Office of Chief Counsel upon the request of an IRS director or an area director, appeals, in response to technical or procedural questions that develop during a proceeding. A request for a TAM generally stems from an examination of a taxpayer's return, a consideration of a taxpayer's claim for a refund or credit, or any other matter involving a specific taxpayer under the jurisdiction of the territory manager or the area director, appeals. Technical Advice Memoranda are issued only on closed transactions and provide the interpretation of proper application of tax laws, tax treaties, regulations, revenue rulings or other precedents. The advice rendered represents a final determination of the position of the IRS, but only with respect to the specific issue in the specific case in which the advice is issued. Technical Advice Memoranda are generally made public after all information has been removed that could identify the taxpayer whose circumstances triggered a specific memorandum.

A notice is a public pronouncement that may contain guidance that involves substantive interpretations of the Internal Revenue Code or other provisions of the law. For example, notices can be used to relate what regulations will say in situations where the regulations may not be published in the immediate future.

An announcement is a public pronouncement that has only immediate or short-term value. For example, announcements can be used to summarize the law or regulations without making any substantive interpretation; to state what regulations will say when they are certain to be published in the immediate future; or to notify taxpayers of the existence of an approaching deadline.

Search for US Tax Court cases in this dedicated Westlaw database (1942-).

Search for Court of Federal Claims cases in this dedicated Westlaw database (1945-).

Search for Bankruptcy cases in this dedicated Westlaw database (1789-).

U.S. District Courts. Federal District Courts have jurisdiction to hear nearly all categories of federal cases, including both civil and criminal matters, within their geographic areas.

Search for US District Court cases in this dedicates Westlaw database (1945-).

U.S. Court of Appeals. The losing party in a decision by a trial court in the federal system normally is entitled to appeal the decision to a federal court of appeals. Each regional circuit court of appeals hears appeals from the district courts located within its circuit, as well as appeals from decisions of federal administrative agencies.

Search for US Court of Appeals cases in this dedicated Westlaw database.

Search for Federal Circuit Cases in this dedicated Westlaw database.

Supreme Court of the United States. The court does not decide many tax cases; if there is a constitutional issue concerning a tax or if there is a split in the Circuits on a particular tax matter, the Supreme Court is far more likely to accept the case. 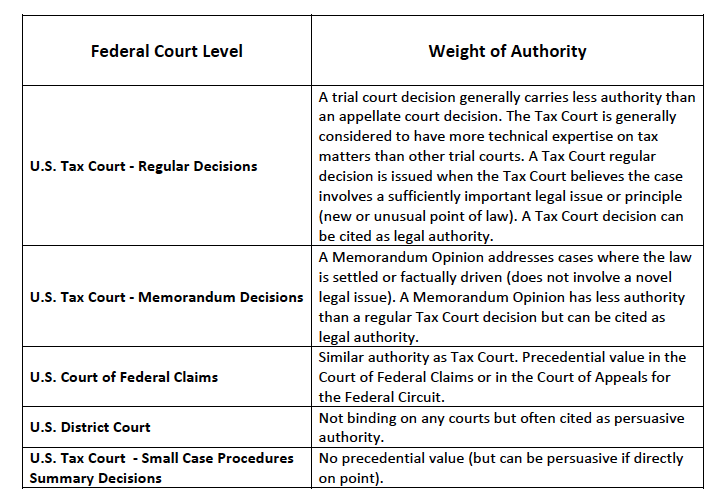