What is a Popular Name Table?

As they make their way through Congress many laws are given names. These names allow us to refer to the law without having to use the citation. Additionally, these names can help describe what the law is about, like the 50 State Comemorative Coin Program Act. Other times the law may indicate the sponsor or creator of a law, like the Dodd-Frank Wall Street Reform and Consumer Protection Act. Still other laws are named to honor an individual, like the Amber Hagerman Child Protection Act of 1996.  These names are known as Short Titles. 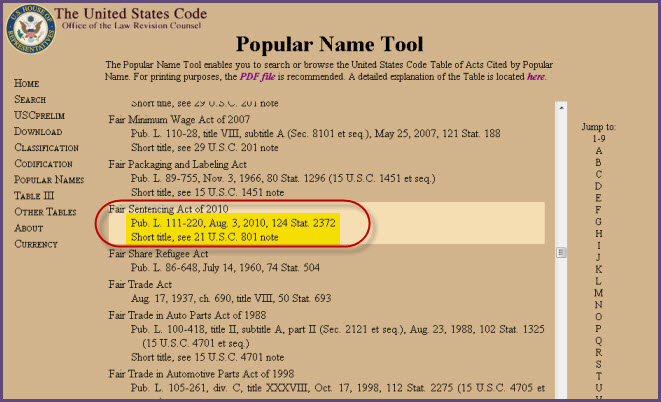 Popular Name tables can be very helpful tools to your research, but remember, the short title of the law MUST be listed within the law in order for it to qualify as a popular name. For example, if you look for the the USA PATRIOT Act in a Popular Name Table, you will find nothing. USA PATRIOT is an acronym for the real short title, which is the "Uniting and Strengthening America by Providing Appropriate Tools Required to Intercept and Obstruct Terrorism Act of 2001." Not really a short title at all, is it?

Also, some common names of laws that we use are misleading. For example, "Title IX" has NOTHING to do with Title IX of the U.S. Code. It is located in Title 20, section 1681! We refer to it as "Title IX" because it was named "Title IX of the Education Amendments of 1972", until 2002, when it's official short title became the "Patsy T. Mink Equal Opportunity in Education Act" in honor of its principle author, Congresswoman Mink.